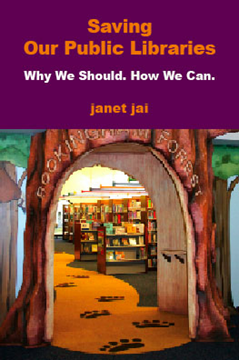 Sometime in the next few weeks I’ll review Saving Our Public Libraries: Why We Should. How We Can, by Janet Jai—“must” reading for participants in the Digital Public Library of America.

Literacy, lifelong learning for the masses, patrons’ economic advancement, and promotion of democracy are foremost on her mind.

Culture and heritage would fall within the learning category, but clearly Ms. Jai recognizes the need for balanced priorities—something missing from the current university-dominated DPLA, one reason why LibraryCity favors the creation of intertwined but separate public and scholarly digital library systems, with somewhat overlapping boards. Don’t get rid of any of the current DPLA participants. Just reorganize and let them focus on their strengths, while creating a technical services and infrastructure organization serving both the public and scholarly sides. That way, we can avoid wasteful redundancies and create synergies without losing anyone’s priorities in the shuffle.

In real life, what public library systems have the balance I’m seeking—especially in cash-strapped cities and in rural areas with limited resources? I’ll welcome your thoughts via e-mail or the comment area for this post.

Here’s one great example: the Georgetown County system in beautiful rural South Carolina (picture)—run by Dwight McInvaill, whose appointment to the DPLA steering committee is an extremely encouraging sign of progress by the Harvard-based initiative. No, I don’t know where he stands on the separate digi-system issue. But from afar at least, I love what his local system is doing, both on- and off-line. With Dwight’s permission, I’m reproducing an email showing his abundant awareness of the potential of digital technology for encouraging literacy (while also serving the cultural and other needs that preoccupy the present DPLA): 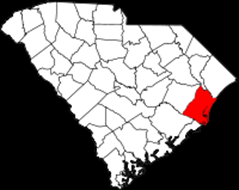 You are indeed a kindred spirit! I appreciate your sending me this email along with the invitation to participate on LibraryCity. I’m under some intense deadlines during August and September, but I look forward to this opportunity at a later date. I am also intrigued by your suggestion concerning ruggedized tablets for low-income parents with young children. I am additionally glad to represent as much as possible the perspective of medium-sized and smaller public libraries, particularly rural ones during the DPLA process.

To me, rural libraries offer a real opportunity to experiment for community good. Here are some things we’ve done here during the last decade: