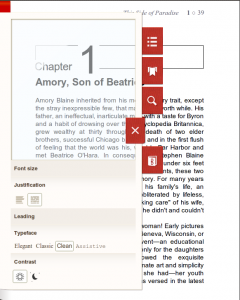 The Booki.sh buy demonstrates OverDrive’s willingness to upgrade its technology and comes just days after the corporation’s Harry Potter deal.

Booki.sh is in Melbourne and is or was Australian owned, further strengthening OverDrive’s international ties, which a U.S. national digital library system should have. Libraries are a way to promote culture—ours and everyone else’s—and win friends along the way. I also love the idea of American librarians picking up insights and expertise from colleagues abroad. Libraries could also use more presence in the retail area. Book.sh runs its own bookstore, and OverDrive will use the technology to power other stores. Buying OverDrive’s international and nonlibrary sides, not just the library part, libraries would come closer to enjoying the extent of influence in the book world that they’ve bragged about.

Looking over the related site and giving the current Booki.sh reader a spin, I found some great positives—for example, the app’s ability to run on on Web browsers on devices ranging from iPads and Android tablets to Macs and Windows or GNU/Linux-powered PCs. A menu let me change type styles and sizes and spaces between lines, aka leading. With the menu out of the way, an actual page from a book look great, even though I’d still welcome an all-text bolding option. Click on the screenshot for a better view; do the same with the YouTube below.

Less impressively, Booki.sh’s reader wasn’t as easy to figure out and use as the Kindle Cloud Reader from Amazon.

I had to go to an FAQ to discover the magic click in the middle of the screen that brought up the menu seen in the first screenshot. The Kindle Cloud Reader, by contrast, is enticingly intuitive; no extensive text documentation or YouTube needed. I doubt most library users will absolutely require either form of guidance to use it—or a library staffer’s  time! Significantly, right off the bat, you can figure out how to change the size and style of the Kindle Cloud Reader’s fonts.

The Kindle reader’s navigation also beats Booki.sh’s approach. Perhaps I’m overlooking something, but I didn’t see a progress bar at the bottom of the Booki.sh reader’s screen. Instead, to get the rough equivalent, I apparently had to drill down and open up a special menu featuring a dragable “paperclip.” Infuriating. Even the old Mobipocket reader had a nice progress bar to invoke. Luddites love to beat up on e-books as hard to navigate, and in avoiding a navigation bar visible while people read books, companies like Booki.sh and OverDrive are doing the e-book business a disservice.

What’s more, on the Onda VI40 Android tablet, Booki.sh appeared sluggish, although the fault might have been at my end since I’m still breaking in this Chinese clone (itself just like Book.ish—unpolished but still promising and fixable through better software).

Both cloud systems offer offline-reading capability, although Amazon’s appears to be less complicated (quick right-hand mouse click from the opening library menu, and I believe that, via the Web site or otherwise, Amazon tips you off about that, almost immediately). On another matter, both systems could benefit from double-column display of books to (sort of) simulate double pages in a real book. Also, I wonder about Booki.sh’s annotation capabilities right now; I apparently couldn’t go beyond bookmarks. I’d hope that annotations, ideally with sharing capability, would be on the way.

Now imagine the additional technical prowess that OverDrive could enjoy as part of a national digital library infrastructure able to tap the best brains on college campuses. Technological expertise, not just capitalization and business variety, explains why Amazon can dictate to the current OverDrive. The Booki.sh acquisition is nice but hardly will close the tech gap between OverDrive and Amazon.

In reader design, both OverDrive and the Digital Public Library of America would do well to consider the simplicity that characterizes Amazon’s readers, be they traditional or cloud-based. Get the basic goodies on the opening screen, and allow advanced users lots and lots of options.

Meanwhile, yes, I intend to give Booki.sh a try on my iPad 3, or whatever it’s called, when it reaches me. Judging from what I saw on YouTube, the iPad incarnation should be among the best ones to use.

For now, congratulations to people at both companies. Booki.sh’s related blog post is here.

The DRM angle: Booki.sh says its system can use “DRM,” and in terms of libraries, I suppose that could mean a time-limited and perhaps scrambled caching arrangement to enforce expiration. At any rate, with sufficient refinements, Book.ish could be much easier for library patrons to use than OverDrive’s current, Adoble-complicated “protection.”

Tip: To get to your Booki.sh online library in a hurry, bookmark https://booki.sh/library if booki.sh doesn’t take you there immediately.

About the name Booki.sh: I hate it, in Web terms! An early version of this post accidentally used Book.ish rather than Booki.sh because the “ish” made a lot more sense to my brain.  Sh, for the curious, is the domain name of the island of Saint Helena, place of exile for Napoleon 1.