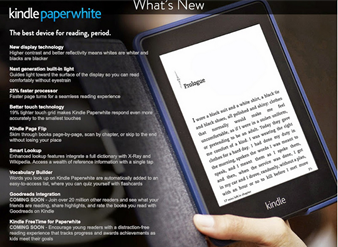 Drat! The newest Kindle Paperwhite E Ink reader from Amazon is still missing text to speech—among the very features Jeff Bezos touted when he unveiled the second Kindle in 2009. Doubt me? Just look at the Paperwhite users guide and see what’s AWOL.

Click on the left image for a better view, with a list of not-overlooked improvements in the newer Paperwhite model. It’s to start shipping September 30. Like the first Paperwhite, the basic version will sell for $119 and up, and supposedly the newer PWs will offer “higher contrast” between text and background. I found last year’s Paperwhites to be still somewhat lacking in contrast despite a noticeable improvement over earlier models. On the positive, the just-added page flip feature looks intriguing, the touch screen is supposedly more responsive, and page turning is said to go much faster.

I myself still miss the old mechanical page-turners (maybe the new Paperwhite will change my mind in that respect). But it’s the lack of TTS that most peeves me even though, yes, I’ve ordered a PW to keep up with Amazon’s E Ink technology, despite my general preference for tablets. Why didn’t Jeff and friends listen when more than a few TTS stalwarts spoke up against the lack of a read-to-me feature in last year’s Paperwhite? What about people with reading disabilities? Or joggers, treadmill regulars and other exercisers for whom TTS is a safer way to go? I myself am into treading big time. Also, what about commuters who’d like to hear a good book on the way home from work? I realize that most customers aren’t as disappointed as I am. But maybe they’d change their minds if they actually tried TTS technology; the voices are far more humanlike than before—one more reason for Jeff not to mute the Paperwhite (or maybe the reason he did so!).

The supposed solution for neglected TTS fans last year was the Kindle Keyboard, but then Jeff has dropped that model; at least I don’t see Amazon selling new ones. I suspect that the wishes of his marketers prevailed over those of his customers, regardless of all the publicity we’ve read about his customer-centric ways. Very possibly he and his crew are keen on sending people in the direction of the more expensive Kindle Fires and also encouraging them to buy audio books from Amazon’s Audible division, as well as purchase “enhanced” versions of Fire e-books with add-on audio from human narrators. TTS chips would have cost maybe two dollars. Even just a headphone jack, without a speaker, would have been better than nothing—if need be, even an extra-slim one that required an adapter to use with a regular headphone.

If nothing else, Amazon could boost its revenue by offering a TTS-capable Paperwhite at a higher price, with optional voices available, such as the British-accented “Amy,” one of the glories of the Ivona TTS company, which Amazon now owns. Is that idea so difficult to grasp, Jeff? I’d be willing to pay as much as $30 or $35 more, so you wouldn’t weep quite so loudly over my failure to buy audiobooks, and I’m guessing that many TTS stalwarts would feel the same way. Simply put, not just in human terms but also in business terms, it’s illogical to diss loyal customers who can’t imagine life without TTS. Look, Jeff, you’re a hands-on manager. Do something. If we think of TTS as a way to make the best use of Americans’ talents, it’s a very cost-effective technology—so here’s to laws requiring TTS in e-book readers if you and others in the industry won’t oblige!

Given the heavy use of Kindles by public library users, I hope librarians will speak up. Needless to say, the muting of the Paperwhite is one of many reasons why librarians should work toward their own ecosystem rather than trusting vendors like Amazon.

I love Amazon’s better side and am huge fan of the company in general despite my concerns in the TTS area and some others such as treatment of workers. Ideally Bezos and his people will see the disconnect between his famous customer-centricism and the muting of the Paperwhite and wise up when it’s time to plan PW version 3.

Related: Peter Brantley’s thoughts on accessibility of e-reading devices—and the industry’s disgraceful objections to some federal efforts to make products friendlier to the people with disabilities.

Update, 4:00 p.m.: I removed a reference to the number of NASA employees with dyslexia since a question had arisen about the statistic.