Oh, the irony! In The Five Laws of Library Science, S. R. Ranganathan argued in the 1930s for libraries as improvers of life for rich and poor alike. Now Google Books has digitized 30 million titles, but you won’t find Laws on the Web in its entirety from Google at any price.

If you go to Laws’s listings at Amazon, you’ll notice that the price of a new hardback edition now starts at $45.95 from a third-party seller, plus the $3.99 shipping. Just one new hardback copy is in stock from Amazon itself, for $54.99 with free Prime shipping. Amazon itself doesn’t carry the paperback right now.

The fate of Laws is one reason why I am so pleased—despite the need for separate national digital library systems for the respective patrons of public and academic libraries, not just “one big tent”—that the Digital Public Library of America will launch its demo project on April 18. May the DPLA if possible get Laws online for free access! Via the New York Review of Books, you can read more from Robert Darnton, who proposed the DPLA. From this promising debut, I hope that the DPLA will eventually fork itself into two tightly intertwined library systems focused on the needs of their mostly different constituencies in ways that honor Ranganathan’s memory. In fact, state and local libraries could originate the public system, carefully safeguarding their autonomy.

Meanwhile—a wonderful twist! It turns out that via the HathiTrust, a DPLA partner, an e-book version of Laws is already downloadable at no cost. I don’t know the full legal situation but see a Creative Commons license that allows noncommercial reproductions with attribution, but not derivative works. Is Hathi treating Laws as an orphan? Laws came out in 1931, a year still covered in the United States by the Sonny Bono Copyright Term Extension Act. Whatever the case, I’m ticked that the Laws is out there, complete with its famous precepts that libraries must help connect readers with books and books with readers. Given the miserable ranking of Laws on Amazon, however, I wonder how many young LIS scholars have read the actual book version of the Ranganathan’s wisdom, including the first law: “Books are for use.” Sad. I’d urge the students to download copies from Hathi directly or, after the debut, by way of the DPLA link. Ranganathan’s Laws is source material with well-crafted anecdotes that make his wisdom still fresh after eight decades, and it is not that hard to extrapolate from “books” to “e-books” or “Web sites.” 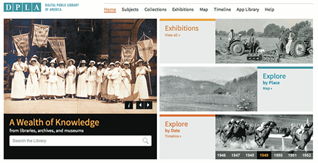 For full preservation the DPLA ideally will be able to back up all content in the near future to a centralized system of servers with different storage media, in many locations. A big wish of mine! Meanwhile the organization’s links to Hathi-type resources like Laws will be valuable in other ways.

In the Review, Bob Darnton describes how this will work. "The user-friendly interface will…enable any reader—say, a high school student in the Bronx–to consult works that used to be stored on inaccessible shelves or locked up in treasure rooms—say, pamphlets in the Huntington Library of Los Angeles about nullification and secession in the antebellum South. Readers will simply consult the DPLA through its URL, http://dp.la/. They will then be able to search records by entering a title or the name of an author, and they will be connected through the DPLA’s site to the book or other digital object at its home institution. The illustration…shows what will appear on the user’s screen, although it is just a trial mock-up."

With items from collections at Harvard, the Smithsonian, the New York Public Library, and other major institutions, not judt Hathi,the DPLA will be a rich content source for students and other library patrons in many fields of study.

Even with millions of digital items available, however, this won’t be a substitute for the newest books, the ones in highest demand by typical public library patrons.  Still, despite the DPLA’s shortcomings of today, I agree with Executive Director Dan Cohen: “We’re just getting started.”

What better example of the potential than the Ranganathan one? Far more desirable for readers to type dp.la and be able to search for the actual Laws book without effort than to have to reach it via a little link at the bottom of a Wikipedia article!